I'll be honest, I used the + signs in the title because I know they screw up some RSS feed readers and I'm just that kind of person. My next post will have lots of & and ? symbols and then we'll move into utf-32. The Internet is a house of cards ready to come down with one seldom used Chinese character.

For the sake of this brain twisting exercise, let's assume that you can't be a game designer+artist+programmer, because that combination just goes against god. And also, for the sake of argument (and because I like to argue), let's assume if you're an artist or programmer, you have no talent in the other profession, and by no talent I really mean no talent.

I ask this questions because I fall into the second category. I started programming back when disco was cool. I started with Basic on a CP/M machine, then moved to Pascal before discovering Z80 assembly language. I had always heard assembly language was fast, but I was not prepared for the shear speed of it over Basic. Running my first assembly language program was a religious experience. My eyes stared wide at the screen as it filled with the @ character in what seemed to be instant. I literally said "oh my god" and that was the beginning of my 25 year death march known as the game's industry.

I learned C and C++ while working at Lucasfilm to build the SCUMM compiler and later when the SCUMM engine moved to the PC from the Commodore 64 and I have continued to program every day since, recently learning objective-c as I dabble in some iPhone games in my spare time (objective-c is very cool, it took three days of swearing before it clicked).

But the problem is I have no art talent. None. Absolutely zero. When I try and do art, it destroys nearby things that might also be art. I'm like art anti-matter. When my art comes in contract with real art, they annihilate each other. It's hard to tell if my prototypes are any fun because people are always shielding their eyes and gasping when they see my art. Even my stick figures look crappy. I know some programmers that draw crappy art that looks cool because it's so crappy. My art is just crappy. Clayton Kauzlaric did all the art on Grumpy Gamer, mostly out of pity, I assume.

Some examples of my art: 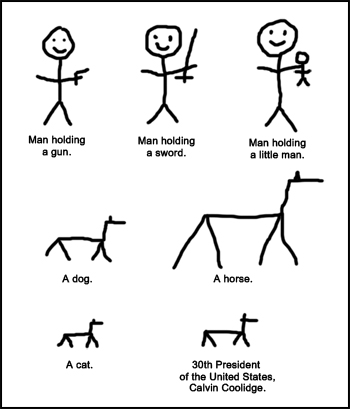 But I know some artists that feel the exact opposite. They produce brilliant looking mock-ups of game ideas, but can't program enough to produce even a basic prototype in flash. They feel the same frustrating that I do.

So which is better?