Last month I finally got done signing over 7000 cards for the Limited Run Games physical release of Monkey Island.

They had over 7000 preorders and I signed every one of those cards. If you bought one of the LRG Monkey Island boxes you won't get a Certificate of Authenticity with a crappy machine printed signature.

I signed them all.

I even left a few special messages on the backs. 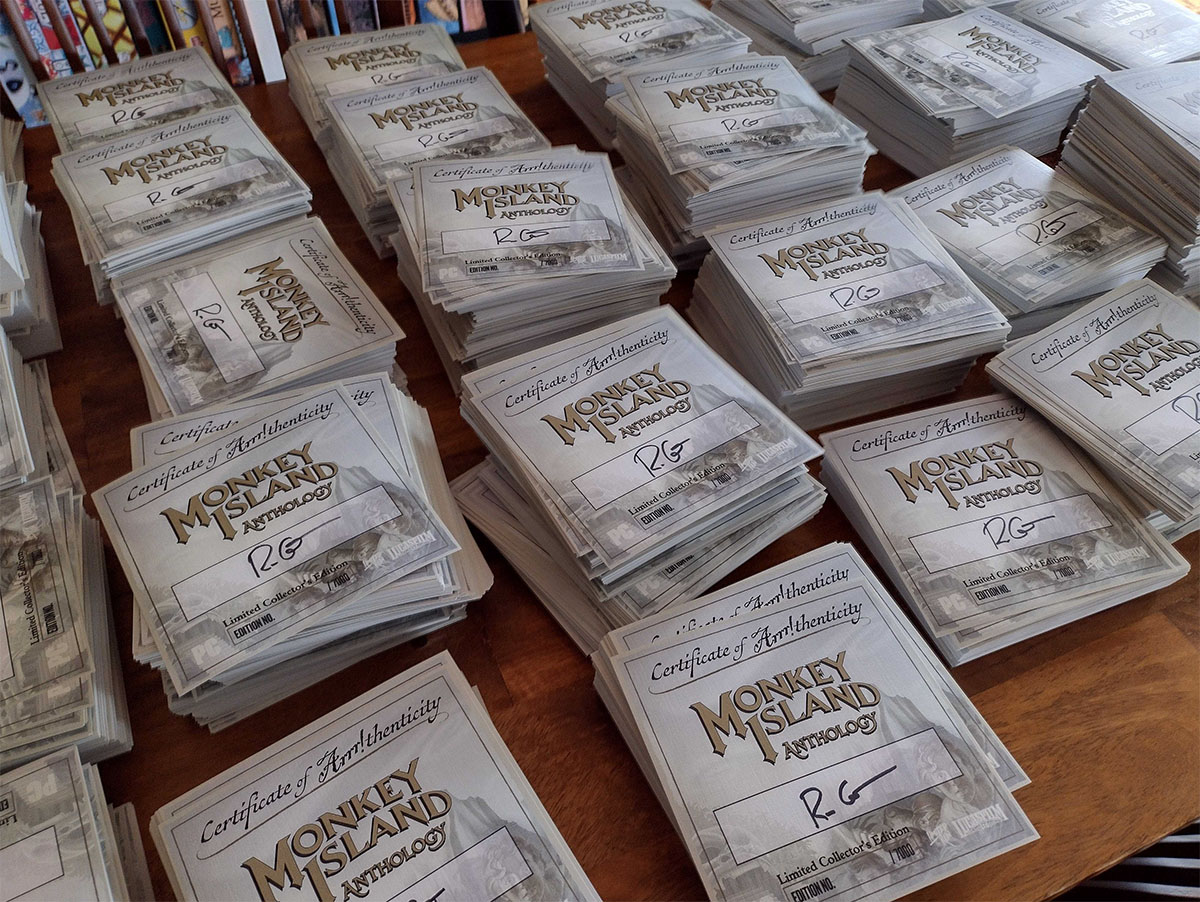 View 25 comments or add yours

How to make your own game engine

At first I was going to just copy/paste his article and call it my own then I realized that is kind of a dick move.

Well worth a read.

In my 35+ year career in games I've never used an off the shelf game engine. Starting with SCUMM I've always build my own. I love the power and the freedom. It's hard work and probably cost me more but I love making game engines and writing compilers. It's a skill you slowly acquire and after the 5th one it's not a daunting task anymore.

I ran into a programmer at an indie meet-up and she told me this story about how another programmer at her company brought up building their own game engine. Someone responded with "What! Are you Ron Gilbert!"

I wear that as a badge of honor. 😀

View 26 comments or add yours

Yes, I'm tired of dystopia fiction. A sentiment I probably didn't need to repeat because it's in the title, but I really am. Nothing points this out more to me than Star Trek.

Star Trek used be be about hope. Even in the dark days of the 1960's cold war you could see hope for our future in Star Trek. They mange to comment on our then messed up world while being optimistic about the future. It's a lesson current Star Trek could learn from.

Next Generation followed in that tradition. There was conflict but also hope in what the future could be.

Voyager was still about hope and the ideals of the federation.

Deep Space Nine started out that way and then it became a serial about war.

Enterprise also started out in a hopeful future, then it became a show about war and dystopia.

Years later Picard showed up. How I wanted to like this show, but it's a bleak show in a bleak future.

And Discovery. WTF! Yes, they saved the future federation but it's a bleak dystopia world I don't want to relax in after a day of hard work.

And I won't get into the bad writing where every problem on Discovery is solved by deus ex machina or some mind-bending quantum physic problem being solved by some crew member in 30 minutes.

There is a lot of long overdue cast diversity in Discovery. They get some kudos for that. Just not for their writing.

I am holding out hope for The Captain Pike Show where they claim to get back to the roots of Star Trek. We'll see.

Lower Decks is great! It's funny and takes place in the Next Generation world.

Now comes the worst offender of them all: Star Trek Prodigy.

Maybe it gets better after the first episode (which I didn't even make it through).

But in the optimistic future that we owe our kids.

P.S. No matter how bad these Star Trek shows get, I will still watch them all.

P.S.S. The Orville isn't "Star Trek" but it's a darn good "Star Trek" show. I hope it returns, but I don't have my hopes up. Stupid Pandemic.

View 34 comments or add yours

I've decided to go back on Twitter but with a few changes:

I used to follow 200+ people and now I follow 0. I apologize if I unfollowed you. It doesn't mean I love you any less. I might follow people at some point, but only friendly positive people.

I left Twitter because it was doing serious mental damage to me.

View 32 comments or add yours

I wrote Scumm and I don't think I could do what they did.

View 18 comments or add yours
Next