Escape the room in a box

I've never played a real-world escape the room game. I still haven't, but last night we played an escape the room in a box game. It was fun, but also a little odd. I'm not sure how the real-world ones work, but this in-a-box one feels like a poorly designed adventure game. That's not a bad thing, it's a different type of game under very different constraints, so I give it a big pass. It was also fun, and that's what's actually important. I also don't know that I could do better, but hey! This is the Grumpy Gamer blog. 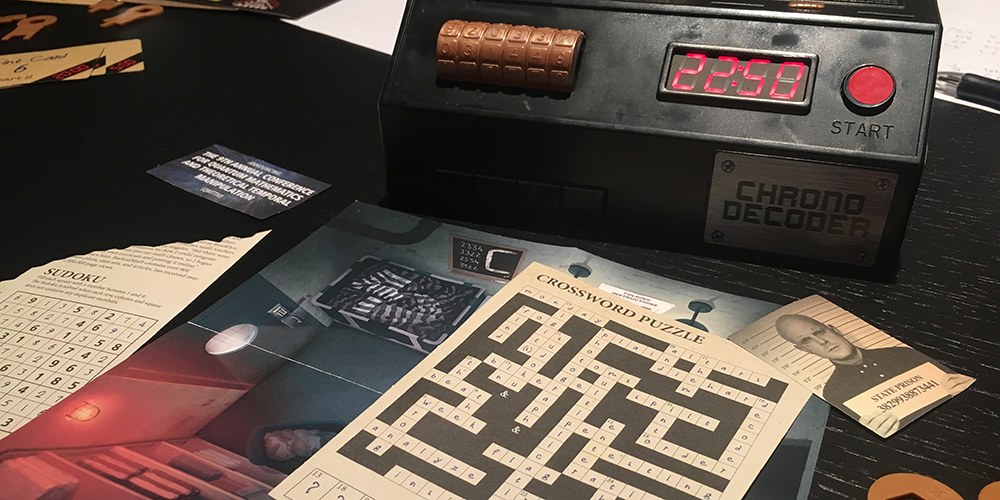 We finished the game with 22:50 left on the timer. Not that I'm bragging.

I'll try to give a definition: real escape rooms are 3D version of logic games. It's a mix of anxiety, fear, coolness, surprise, giggling..  in a word: FUNNY.

I'm sure you won't be disappointed when you'll try your first real escape room!

Here in Russia most of them really are just poorly designed adventure games.

By the way — those math questions in the comments are frustrating. Can't stand them but the urge to leave a comment prevails.

I've done a real life escape the room, and a "poorly designed adventure game" is an apt description.

I've done a real life escape the room, and a "poorly designed adventure game" is an apt description.
I hope there are exceptions, since I'm planning on trying an escape room with some friends. I heard that there are both good ones and worse ones.

I tried my first escape room last year (birthday present). Got to play with two teams of 4 people (all friends/family). We managed to escape (in part due to my using adventure game logic) so I have a good feeling about it overall. But yeah, it was klunky compared to the best adventure games I've played. One of the biggest issues for me was the time limit. Understandable, since they had to get us out and the next group in, but I prefer my adventures to be without time constraints.

Also, the puzzles were literally mostly like and key, or combination and combination lock. There were several leaps of logic I got to take that totally paid off, so that part was fun. But the lock and key filler felt like laziness on the designer's part.

Something of the Head

A lot of escape rooms claim to be like adventure games, but as you all say, they feel more like poorly designed adventure games. It's not they are not fun, but after the initial excitement, the next day you can't stop thinking "I'm sure this and this and that could be done much, much better". Specifically, the word "coherence" seems not to be part of the designers' vocabulary.

With this in mind, I'm working right now on the creation of one of these rooms but I'm trying hard to make it like a real life adventure game. I'm designing what could be called a "video game engine for real life games". A software like an adventure but with a boring user interface which will accept as input a specially created adventure file and will allow the game master to "tell" the computer what is happening in the real game, making it react to the players' actions with sounds, adaptive music, clues, etc. In these games the user interface has more to do with constructive elements and props.

I'm not sure if I will complete this (I never made a video game and I think it's too ambitious for me), but I'm finishing a first analysis about puzzles and other elements it will contain and I will begin programming soon. This study phase made me get a pretty good insight about how a puzzle game should work and the similarities and basic differences between video game adventures and real life game adventures: objects and characters are more expensive in real life, the players can't give themselves clues when "looking at" something, you can't use natural dialog trees with them... But they have more freedom to move and touch, the non-linearity is really useful because it is multiplayer, the game master can play with timing to improve the drama...

I'm really excited about it. If I manage to carry it out, I'll be glad to say that what really encouraged and convinced me to take the leap was finding out your "Why Adventure Games Suck" article when coming back home after playing an escape room and checking that the game I just played met all and every one of the requirements to be a bad adventure except for "I forgot to pick it up". Then I read the part 1 of your series about "Puzzle Dependency Charts" and Joshua Weinberg's approach to them, which boosted me to try to do it the right way. I'm designing now something I call Event Dependency Graph TM (for me, they are graphs all the week), which will help me manage all the information I need.

I enjoyed Thimbleweed Park, but I will never thank you enough for giving me some of the best moments of my life back in the 90s.

Would you ever consider designing a real-life Maniac Mansion? I love escape rooms and have always had this vision of a Maniac Mansion themed room (well, it would have to be more than just a room to be true to its namesake).

You should check out the Unlock! series.  Specifically the "tonipal's treasure" game.   It has a monkey island feel to it!  https://www.asmodee.us/en/games/unlock/

hello!,I really like your writing so so much!
percentage we keep up a correspondence more approximately your
post on AOL? I need a specialist on this space to solve my problem.
May be that's you! Taking a look forward to see you."=
Regards: <a href="https://www.thedarkweblinks.com">Eve Hunt</a>

There are many places to play fireboy and watergirl , but Goldy games is a great site. Trust me, i played this game without lagging!