Me on the Great Wall of China right after Maniac Mansion shipped. Relax... it was the 80s. 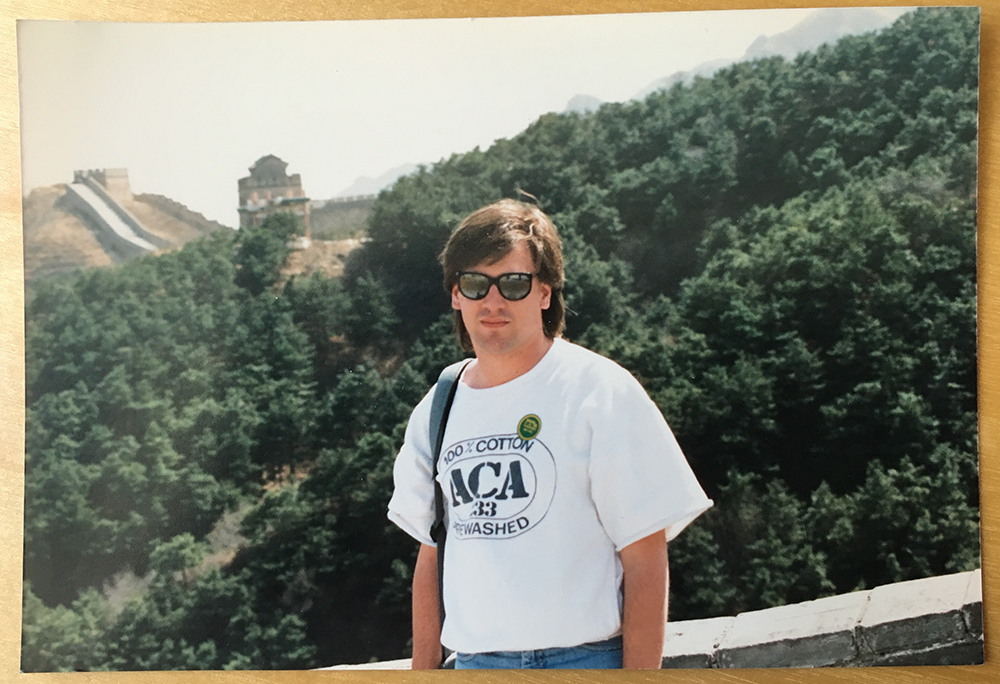 Title: "The genius before The Wall"

When I see that I'd like to imagine this:
"I made the comic game Maniac Mansion but the real maniacs are the ones who built this comically long wall without the other three walls and a roof!"

This face says, "Ask me about LOOM™️".
Did you get any work inspiration from there?

But do you have already in mind a concept for Monkey Island?

And so it was that Ron climbed to the highest monastery in China to gain wisdom. Upon arriving at the temple he was greeted by an old Zen master, who took him aside and spoke to him.
"Ron, I have this idea for an absolutely cracking point and click adventure game," he said, his wizened voice crackling with wiseness or whatever.
"You know the Pirates of the Caribbean ride? Kinda like that but with a load of fourth-wall-breaking humor and a salesmen guy who can't stop moving his arms, and more monkeys and maybe like an underground ghost lair? And just a bunch of really cool stuff basically. With the art style of Loom, but just stick to the regular verbs please, I can't get my head around this musical staff thing."
Thus enlightened, Ron headed back down the mountain. As he sat down to rest, he nodded sagely and whispered to himself: "I shall call it... I shall call it "Putt-Putt Joins the Parade"."

And that's the story of how "Putt-Putt Joins the Parade" came to be.

And so his watch began...

Im still waiting Thimbleweed park to be released on PS3 ....damn !
when it will come out ?

I finally started playing Thimbleweed Park. It was long overdue and what can I say. You're still a genius. At least at programming adventures. :P :D - I certainly hope to see more of you in the future! Best regards.

A well earned rest. Thanks for the Maniacs!