I guess Monkey Island turns 25 this month. It's hard to tell. 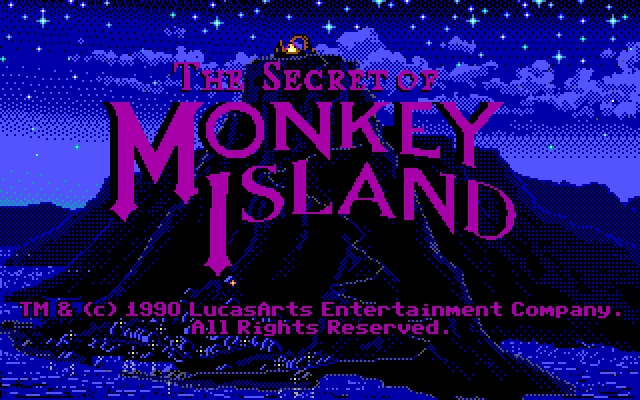 Unlike today, you didn't push a button and unleash your game to billions of people. It was a slow process of sending "gold master" floppies off to manufacturing, which was often overseas, then waiting for them to be shipped to stores and the first of the teaming masses to buy the game.

Of course, when that happened, you rarely heard about it. There was no Internet for players to jump onto and talk about the game.

There was CompuServe and Prodigy, but those catered to a very small group of very highly technical people.

Lucasfilm's process for finalizing and shipping a game consisted of madly testing for several months while we fixed bugs, then 2 weeks before we were to send off the gold masters, the game would go into "lockdown testing". If any bug was found, there was a discussion with the team and management about if it was worth fixing. "Worth Fixing" consisted of a lot of factors, including how difficult it was to fix and if the fix would likely introduce more bugs.

Also keep in mind that when I made a new build, I didn't just copy it to the network and let the testers at it, it had to be copied to four or five sets of floppy disk so it could be installed on each tester's machine. It was a time consuming and dangerous process. It was not uncommon for problems to creep up when I made the masters and have to start the whole process again. It could take several hours to make a new set of five testing disks.

It's why we didn't take getting bumped from test lightly.

During the 2nd week of "lockdown testing", if a bug was found we had to bump the release date. We required that each game had one full week of testing on the build that was going to be released. Bugs found during this last week had to be crazy bad to fix.

When the release candidate passed testing, it would be sent off to manufacturing. Sometimes this was a crazy process. The builds destined for Europe were going to be duplicated in Europe and we needed to get the gold master over there, and if anything slipped there wasn't enough time to mail them. So, we'd drive down to the airport and find a flight headed to London, go to the gate and ask a passenger if they would mind carry the floppy disks for us and someone would meet them at the gate.

Can you imagine doing that these days? You can't even get to the gate, let alone find a person that would take a strange package on a flight for you. Different world. 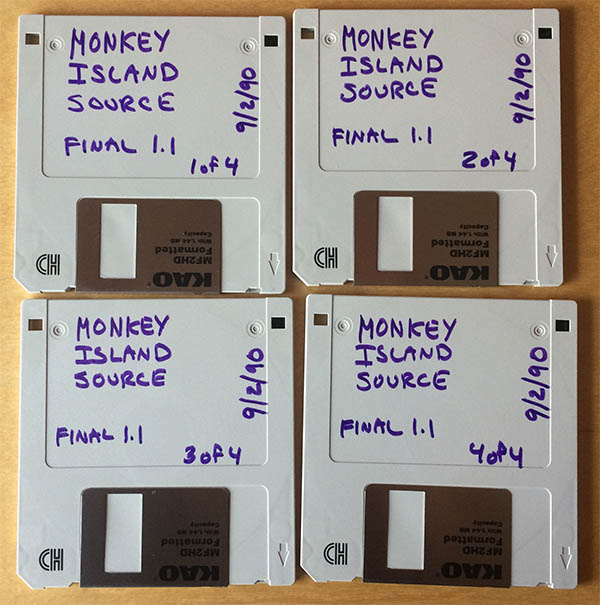 After the gold masters were made, I'd archive all the source code. There was no version control back then, or even network storage, so archiving the source meant copying it to a set of floppy disks.

I made these disk on Sept 2nd, 1990 so the gold masters were sent off within a few days of that. They have a 1.1 version due to Monkey Island being bumped from testing. I don't remember if it was in the 1st or 2nd week of "lockdown".

It hard to know when it first appeared in stores. It could have been late September or even October and happened without fanfare. The gold masters were made on the 2nd, so that what I'm calling The Secret of Monkey Island's birthday. 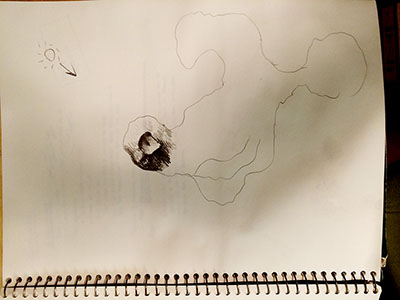 It amazes me that people still play and love Monkey Island. I never would have believed it back then.

It's hard for me to understand what Monkey Island means to people. I am always asked why I think it's been such an enduring and important game. My answer is always "I have no idea."

I was very fortunate to have an incredible team. From Dave and Tim to Steve Purcell, Mark Ferrari, an amazing testing department and everyone else who touched the game's creation. And also a company management structure that knew to leave creative people alone and let them build great things. 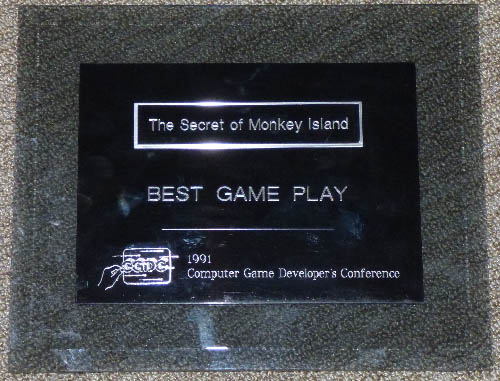 Monkey Island was never a big hit. It sold well, but not nearly as well and anything Sierra released. I started working on Monkey Island II about a month after Monkey Island I went to manufacturing with no idea if the first game was going to do well or completely bomb. I think that was part of my strategy: start working on it before anyone could say "it's not worth it, let's go make Star Wars games".

There are two things in my career that I'm most proud of. Monkey Island is one of them and Humongous Entertainment is the other. They have both touched and influenced a lot of people. People will tell me that they learned english or how to read from playing Monkey Island. People have had Monkey Island weddings. Two people have asked me if it was OK to name their new child Guybrush. One person told me that he and his father fought and never got along, except for when they played Monkey Island together.

It makes me extremely proud and is very humbling.

Maybe someday. Please don't suggest I do a Kickstarter to get the money, that's not possible without Disney first agreeing to sell it and they haven't done that. 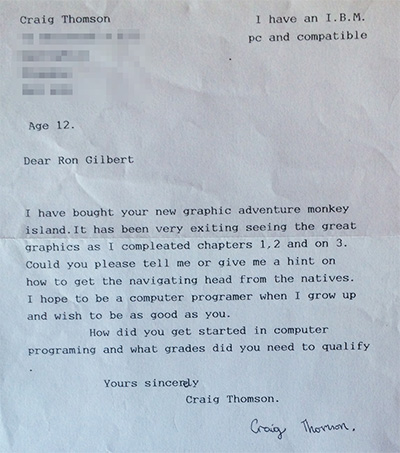 I thought I'd celebrate the occasion by making another point & click adventure, with verbs.

Scott Burnett Jan 01, 2018
I am a 43 year old kid. I love the classics. Maniac Mansion, LSL and of course Monkey Island. I recently purchased myself a MI shirt featuring LeChuck and Guybrush for like $25 from a Facebook ad. I am sure you didn't see a penny of that, shamefully. MI is still in my regular rotation of doing a complete play-through once a year or so. Thanks for the memories! Scott

Ron Gilbert Jan 01, 2018
I'm sure the shirt was completely unlicensed, people selling Monkey Island Shirts don't ask for permission, they just print them. Even if it had been officially licensed merch, I wouldn't have gotten anything. If you haven't already, go buy Thimbleweed Park.

My name is Hamid and I was born in Iran 30 years ago. All off my childhood was covered with Monkey island series and I have played them more than 5 times!!! Is there any chance for monkey island 6 in 2018 or later?!! Thimbelweed park is nice but monkey island is something else!!!

Dan Simon Jan 08, 2018
I was going to ask you to pretty please release a Monkey Island 30th Anniversary edition with lots of sketches, prod notes, photos, back story and select fan mail - then remembered you no longer own the rights. Still, would so buy, even without the game!

Maik Jul 09, 2019
I am over 30 but still love Guybrush! And one day, I will take my original package and fly to you, just for asking for an autogram (and silently make a selfie ;)). Thanks for this (and so much other) gems!

Back then Monkey Island was the first game I remember I played. I was about 10 years old. Now, I am 37 and it is still a part of my life (Of my brother's as well btw.). I don't know how often I played it by now and hearing the soundtrack still makes me smile. And when I am at the "dam" on Monkey Island I can still feel the heat 😀

I would not call me a nerd, but I created a DIN A2-Poster of the map of Monkey Island and put it in a frame onto a wall in our living room, and recently I bought a big box of the game for €150 - With disks that I need to check if they still work :-D

Thank you for countless hours I walked along with Guybrush. The game (Even more than the second part) has this particular magic.

I am writing from Germany and just ran into this website of yours. Just want to thank you for all you have done for all of us by creating MI !  Its like the moon landing..."That's one small step for a man, one giant leap for mankind"...it surely is!
I just bought TP for Android.
However, I am trying to give all that passion of mine to my little kids. Difficult these days with all that futuristic  gaming stuff....but I will try my best. :)
Greetings from Bavaria!
Daniel

Apparently Disney is interesting in letting people use the IPs maybe you can get MI back? I'd help you pay for it haha

Hans Sep 03, 2020
I am 34 and the Lucasfilm / LucasArts adventures are an important part of my childhood. I grew up in a small village in Germany and these games always were my 'window to the world'. I always dreamt about working at Lucasfilm back then.
I remember it being very hard to get Monkey Island. Someone installed it on a computer in the school my father worked as an teacher at, but it was not possible to copy the installed game files to floppy disks so I somehow had to split the files. Eventually it worked out, but then I found out about the copy protection at home so I had to find someone with the handbook and a copy machine. Even if I had enough money back then, I would not have been able to purchase the game regularly because there was no shop selling computer games near my hometown.
I bought an original copy some years ago and also own Thimbleweed Park on PC and iPad.

Leo Sep 04, 2020
As many here I want to thank you for such an amazing game. It's the one that brings the best memories of gaming with with my brothers and cousins while being a child. Thank you, all the way from Argentina.

Adam Sep 04, 2020
Did Craig Thompson end up becoming a programmer?

The world must know!

Zibri Sep 05, 2020
Hi, Ron! Publish that code on github or somewhere! It would be great to have it out of those diskettes and well preserved for everyone to behold.

Andrea Sep 11, 2020
Happy belated birthday Monkey Island and hi and a big thank you to you, Ron.
A truly inspirational masterpiece, probably the games (1 & 2) with the most beautiful atmosphere I've ever player (and I ever will, since I don't get along with modern games, probably having worked in the industry for a long time didn't help).
A game that is the hearths of many people of the generation lucky enough to experienced it first hand, but also younger ones.

I'd love to see and play a third episode of Monkey Island,  especially having seen Thimbleweed Park, which is great and does manage to capture the feel of that generation of games I miss so much.. But sometimes, better not touch those true masterpieces we loved.
On the other hand, if you were to make a Mystery of Donkey Island featuring  Roy Toothbrush and you give us an editor to edit those names to our liking once we own the game, and upload a custom game's logo...

Ariel Castelluccio Oct 26, 2020
Ron, I spent my teenage years playing Monkey Island, I remember telling the progress in the game to my schoolmates who also found it fascinating. Then when my son was a baby, I would hum the tunes to him at bedtime. MI is a part of my life. I was lucky to meet you when you came to Argentina in 2016. You signed a poster for me that I framed on the wall and I proudly keep as a treasure. I wish you could one day make Monkey Island 3, we are legions and legions who look forward to the same thing. Thank you!!
Add your comment: