My latest weekend project. I'm going to build a Plex server using a Raspberry Pi. I'm tried of having to run Plex on my computer every time I want to watch something. 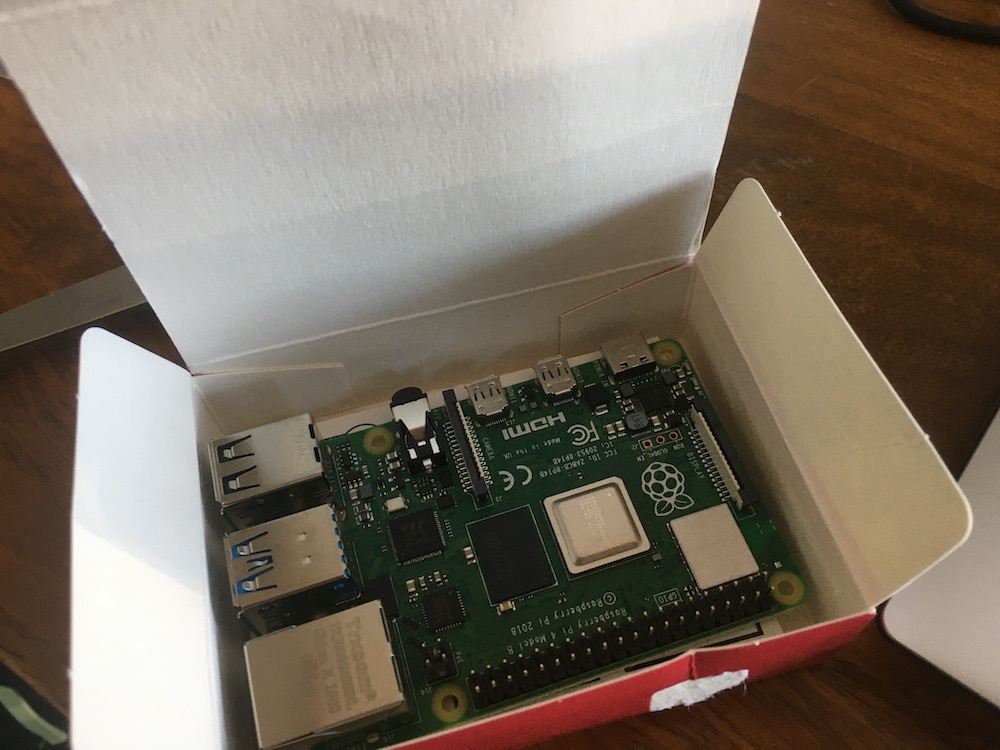 I'm always amazed they can sell these so cheap. The 11 year-old me's head would have exploded.

UPDATE: My plans have been thwarted by not owning a microSD card. I guess it will have to wait until next weekend.

Folden Aug 09, 2020
Yeah, when I first got mine, I couldn't put it down. I've had it a few years nowand every time I look at it on the shelf I'm still kind of in disbelief a computer can be so small and affordable. Not to mention spec-wise it just blows the machines I had as a kid out of the water.
Crazy stuff.

Truc Aug 09, 2020
I've got the same setup, and as long as you don't need transcoding it's so much more reliable and efficient than running Plex on an old Mac/PC. I also tossed Pi-hole on there to filter Internet traffic at the DNS level, and the thing still spends the majority of its cycles idling and underutilized.

chrisis Aug 10, 2020
I use my Pi 4 as a makeshift NAS (basically attached 2 big USB HDDs where I store all my crap on...). It's still very underutilized, so yeah using it as a Plex-server in addtion is a neat idea.
I also have a Pi 3 which I use as a combined Wireguard VPN server (so I can access my home LAN while outside) and WiFi hotspot for guests... Yeah it's not very creative but I still get plenty of use out these things.

Stevo Aug 10, 2020
I use Kodi instead, because I do not like to be connected to the Plex-server. I like to run everything locally!
Anyway good luck!

Evan Aug 10, 2020
I hooked my 3D printer to one of these and now control it with Octoprint. It's an amazing little board.

DIeSkaarj Aug 10, 2020
You can, if you have an old laptop laying around and a SATA to USB adapter, run the Pi from a salvaged HDD. But it really is amazing how powerful these credit card sized devices are and I have a hunch that they will be able to comfortably play Diablo Immortal.

Iron Curtain Aug 11, 2020
It's not just Raspberry Pis that use microSD cards; the Nintendo Switch uses MicroSD cards, and its OS is based on Android, which itself is based on Linux.

I just find it extremely amusing that Nintendo, who has a proprietary mindset akin to both Apple and Disney, is using an open-source operating system for their latest hardware offering. Then again, even macOS is unix-based, so...

chrisis Aug 11, 2020
@Iron Curtain - while the Switch has a  basically stock Nvidia Tegra processor (like the Nvidia Shield which is an Android device), its OS is definitely not based on Android at all (it's actually a proprietary OS that's based on the OS used by the 3DS)

Iron Curtain Aug 11, 2020
@chrisis: Huh. I did not know that. I had heard otherwise. Thanks for enlightening me!

It says here that it's based on the 3DS OS which is based on the BSD OS, which is unix-based. So it has more in common with macOS than Linux in that regard. I guess my worldview has changed.

In any event, thanks!

Iron Curtain Aug 11, 2020
@chrisis: anyway, if the Wiki article is to be believed (https://en.wikipedia.org/wiki/Nintendo_Switch_system_software), then we're both right: it's based on FreeBSD, and there's enough Android code to say some code of the OS was taken from Linux, but it was also based on the 3DS OS, but then again, the 3DS OS was based on FreeBSD, so the Nintendo Switch OS (and the Playstation 4 OS, for that matter) are proprietary OSes based on free and open operating systems.

Winni Aug 12, 2020
Try JellyFin instead of Plex -- it does the same as Plex, is full open source and does not require an account with some company.

Ron Gilbert Aug 12, 2020
Try JellyFin
Unless there is an App on the FireTV, then it won't work for me.  I also value Plex's ability to figure out what movie or TV show it is and download key-art and all the meta data with very little to no interaction from me.   Plex is already in my pipeline and I have a lot of content already in it, I just don't want to have to launch it on my Mac in my office every time I want to watching something in the living room, so this server makes since.

Brian Aug 12, 2020
You should consider getting an SSD for the Pi. You can hook it up via the USB 3.0 with an adapter and run that instead of the dinky SD card. Make sure you check the list of tested adapters: https://jamesachambers.com/raspberry-pi-4-usb-boot-config-guide-for-ssd-flash-drives/

They have updated the process so that all you have to do is copy over some files from an SD card image to the boot sector on your SSD. This would be your Plex install (but the SD card would be Raspberry Pi OS). I think it's basically all the .dat and .elf files. This is assuming that the Pi 4 you purchased came with the latest firmware and such.

Winni Aug 13, 2020
That's the beauty of Jellyfin: It --does-- have apps for the Fire TV, Android TV, Android, iOS and also a rather good web interface.

Gaven Aug 16, 2020
Synology NAS is a great home for plex.  Means you can store all your media and run the plex server (with enough power to transcode for mobile streaming/viewing) on one low power box and never have to think about it.  Also it's just linux on the box and runs docker so you have a lot of flexibility to get other bits and pieces running there that you don't want contaminating a daily driver computer.

Connor Aug 17, 2020
One process I've adopted, and thought I'd share for anyone who also has fun doing stuff like this, is use Filebot to also sort everything into Plex-friendly naming formats. You drag and drop en masse to Filebot (6 bucks for a year or 48 bucks for forever.) and it will batch re-name all the files for you into a format of your choosing, and also set up the folder structure as well. (I usually go with "TV Shows/Show/Season 0X/Show (Year) - S0XE0X") Then Plex will see everything, and will have to try it's hardest if it wants to mess up, because it'll be the perfect format for it. (Pulls from TheTVDB and other such sources - same as plex.)

The formatting code is highly customizable as well. I was able to reorganize my whole movie and show collection in less than 30 minutes. (The 30 minutes were getting the formatting right, it took literally 10 seconds to rename everything and have it sort it.)

Fun little thing I found when I was tired of my past self's stupid naming conventions and overwhelming laziness. Now I'll have no excuse! - I say for the 200th time about the 200th thing.

Figured I share even if no one cares. Enjoy your Pi!