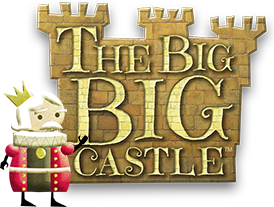 Sometimes it feels like Clayton Kauzlaric and I have a game-making addiction problem. We both have day jobs where we sit around all day long and make games for money, but then we go home and make games for free. If God didn't want us to make games he shouldn't have made it so much damn fun.

Over the past few years we've made around ten iOS games in our spare time. We'd work on one for a month and then some new idea would hit us and we're on to that. ADD game designers. The Big Big Castle! is the second one we've actually gotten around to finishing. The first was a word game called Word Spiral. Both are for the iPad.

The Big Big Castle! stared out because I wanted to play around with Box2D, then Clayton brought up this idea he's had for the last 10 years about building stuff and watching it fall down, so we started working on that. Clayton's nine year old son said he'd like to blow up the castles he'd just built, so we added that, then we thought it would be fun if you could destroy castles your friends had built, so we added that.

The Big Big Castle! is the result of a few months of spare time on the weekends. It's just a fun little game. A labor of love we thought we'd share.

It's FREE so what have you got to lose. If you feel guilty about pirating Maniac Mansion, Monkey Island, DeathSpank or Putt-Putt Saves the Zoo, buy a coin pack and we'll call it even.