The vertical slice is one of the dumbest things the game industry has ever come up with. I threw this together to show how dumb it is. Not sure why I was thinking about it today, but I was. The publisher I'm working with now doesn't want a vertical slice, some don't, but there are quite a few that do. 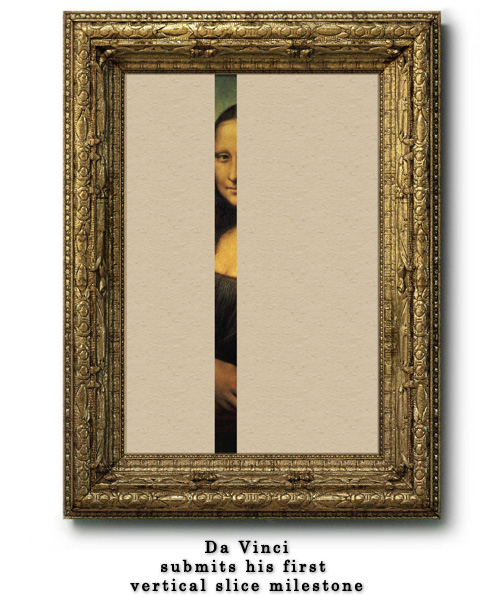 It's just a dumb way to build a game and it results in wasted time and money and doesn't produce the best game possible.

A publisher handing a developer a big chunk of money to make a game should mean a carefully planned preproduction, and if it's risky from a game play or tech stand point, absolutely build a prototype (not just for them, but for you as well), but doing a vertical slice is just kowtowing to the uncreative.

We work in a creative industry, I expect the 'execs' to understand that creativity. Given that they are the ones getting stinking rich off of all our hard work, shouldn't we expect that from them?

What if movie studios required vertical slices of movies. It just doesn't work.

Vertical slices might work in a medium where you start at the beginning and grind though in a fairly linear fashion and what comes out is 90% complete. Maybe writing a novel works this way, but making movies and games do not. They are an iterative processes. You build foundations and the build up from there.

Da Vinci didn't paint the Mona Lisa one strip at a time, he slowly built it up from sketch to finished painting. That's the way games should be built.